From early records the Romans played a game of paganica, in the streets of Londinium, the Belgians a game of chole, and the Dutch a game of kolven.

Whilst the argument rages on, the one indisputable fact concerning the origins of golf is, that golf was first played in the form we know it in Scotland.

It would appear that around 1353, golfers adopted the principle of allowing each team to hit a second uninterrupted shot. Previously, teams of players would alternate hitting a ball back and forth across the links in Fife.

The history of golf shows that golf also rapidly acquired such a popularity, that it eclipsed the sport of archery. Archery was so vital to Scotland’s national defence, that the playing of golf in Scotland was made a criminal offence punishable by hanging.

The first year that signs of the "golf bug" appeared among the population in parts of Scotland was 1457. In Scottish golf history a game called "gouf", it is referred to in Acts of Parliament under the Scottish King, James II.

Around 1502, King James IV succumbs to temptation and purchases clubs and balls from a bowmaker in Perth, Scotland.

In 1504, the first record of a golf match, was between James IV and the Earl of Bothwell. 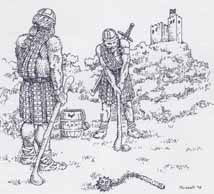 Mary Queen of Scots is criticised for playing golf in the grounds of Seton House soon after the death of her husband, in 1567.

There are many interesting facts in the history of golf such as the Lawmakers ban the playing of golf on Sundays in 1592.

The first mention of the feathery ball, was in 1620. This was a leather casing stuffed with birds feathers. Prior to this date wooden spheres were played.

The Honourable Company of Edinburgh Golfers, founded in 1744 and now based at Muirfield near Edinburgh, was the first organised golf club in the world. It was responsible for writing the first set of official rules of the game of golf, which numbered just 13 in all.

The history of golf shows that these were later expanded and developed by the Royal and Ancient Golf Club of St. Andrews in Scotland, itself founded in 1754. They hold the very first “open”, with the first prize of a silver cup.

The Royal and Ancient is still the game's chief lawmaker and is also historically responsible for determining that the standard round of golf is made up of 18 holes.

The origin of golf spread first from Scotland into England. The first clubs formed south of the Scotland/England border were the Royal Blackheath Golf Club near London, established in 1766, followed by the Old Manchester Golf Club founded at Kersal Moor in 1818.

The first mention of a ladies golfing society is recorded. It is called the Fish Wives of Mussleburgh

Golf then took hold in parts of Wales and Ireland before spreading to parts of the British Commonwealth. The first golf club in the world founded outside Great Britain was Royal Calcutta in India in 1829.

The invention of the gutta percha ball (or "guttie"), was in 1848. Prior to this, golf ball construction was a laborious and costly art practiced by a handful of manufacturers in the vicinity of Edinburgh - and if a ball was expensive, freight was prohibitive. Golf at this time simply had no chance to expand beyond the Scottish lowlands. Since all of golf was compacted into such a tiny area, golfers were able to learn simply by imitating the great players of the day on the handful of courses then in existence.

The first championship meeting is played, in 1857, at Prestwick. The format is foursomes.

In 1860, the Open Championship is held for the first time. The format is strokeplay and it's held over the Prestwick Links.

The first golf club in North America, to be established was by “The Royal Montreal GC” in 1873.

The modern wound (Haskell) ball appeared in the early 1900’s and made the guttie obsolete.

Why are courses designed the way they are? Because sheep grazed the grass between the dunes at St Andrews in Scotland, forming what we now know as fairways and greens.

Golf courses also have bunkers, because at St Andrews the sheep that grazed on what is now the Old Course burrowed into the soft turf to cheat the gales blowing in, off the North Sea.

These natural phenomena shaped the first links so long ago the events themselves have been lost in the mists of time, but some experts believe golf was being played at the Old Course as long ago as the 13th Century.